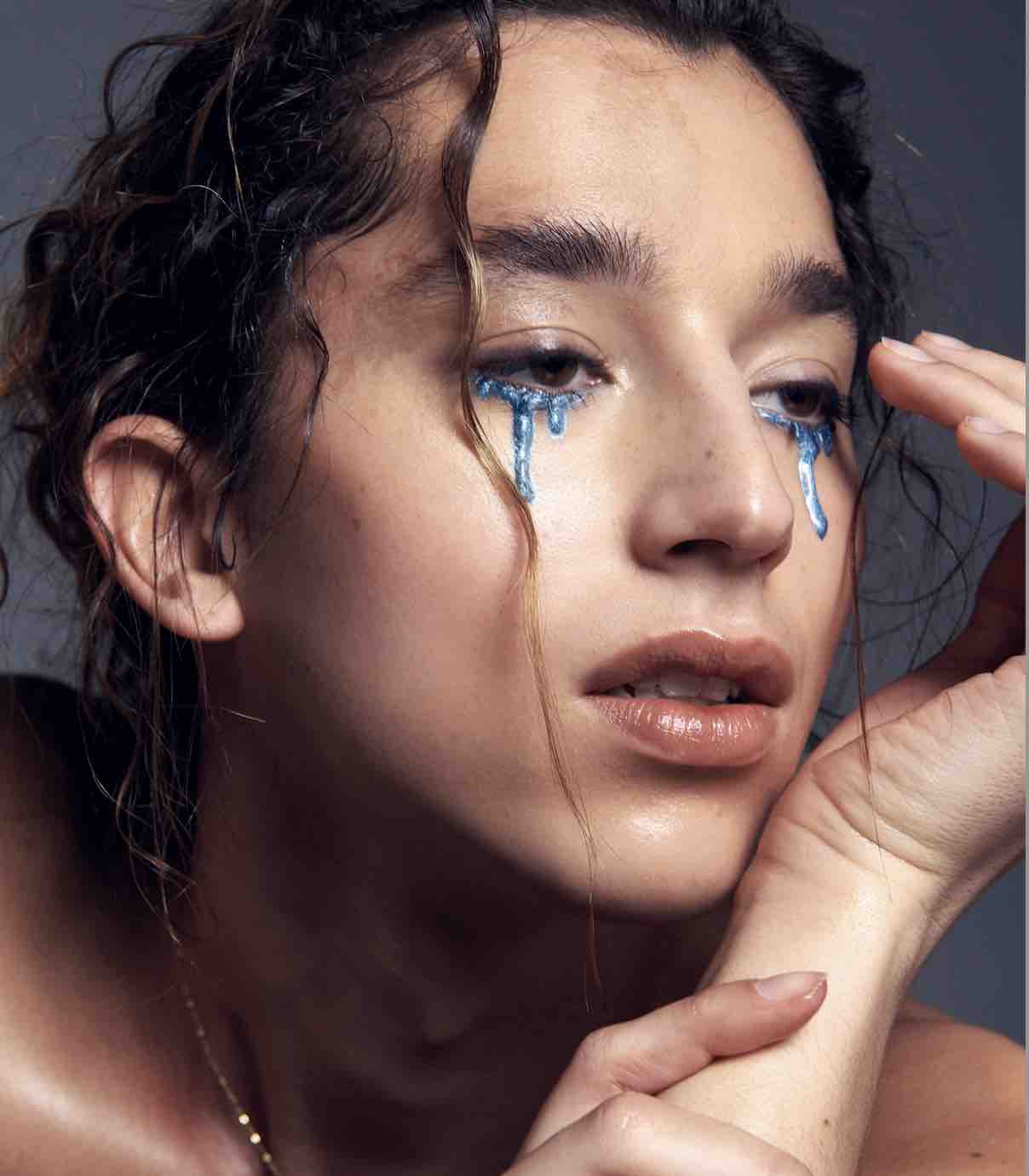 Gia Robles Levy, has been actively sharing her transition journey through social media since she ‘came out’ as trans in 2020. Still only 21 today, she talks to Kym Nelson, writer and comedian, about her struggles to find her identity, why she no longer has to suppress her sass and, what she really thinks about comedians who make trans jokes.

You describe yourself as a influencer, how are you influencing people?
Gia: “I have a story to tell about my transgender journey and I feel I have a mission and a purpose to educate. I’m still learning new things about the transition process and I want to share these findings because it’s not easy if you’re not in the LGBTQ+ community. You can’t  just use Google to find the answers. That’s why I try and tell my story from my own experience. Essentially, I’m expressing my vulnerability; I love doing that. As a result, people always comment on how brave I am to open up and be so vocal about my story. The feedback is empowering. It feels good to know you are inspiring people. It can be quite a heavy topic, so I do use humour sometimes when talking about my transition.”

Talking of humour…how do you feel about comedians such as Ricky Gervais making jokes about transgenders?
Gia: “I feel that he’s not in a position or privilege to joke about the trans community because they are our topics. It’s our struggle. These are the type of things people commit suicide over. I mean how can he go on stage as a privileged straight man and mock us. It’s disgusting. You get people saying; “Oh you don’t have a sense of humour, it’s comedy.” No! If a transwoman had made that joke then it’s funny because she understands, she went through it. It’s like white people using the ‘N’ word. You can’t say that, you’re not allowed to say that word. They don’t know the struggles for black people.”

How would your influence bring more understanding about the trans gender community?
Gia: “I would love to go to schools and educate children and teenagers about this. At school I was bullied and there was a lot of gay shaming. I didn’t know what gay was, while I was being called a faggot on the playground. I would love to stand up in front of a class now and give lessons from my perspective as a trans woman.”

“I wish I had discovered the possibilities and opportunities sooner, then I wouldn’t have had to struggle this hard to find my identity.”

Did you struggle with your sexuality?
Gia: “I did from the age of 15, when I started questioning my sexuality after I realised I was attracted to men, but I could fall in love with women. But at the age of 15 you don’t really know what love is and that is why I was stuck. Then I started coming out as gay but it was a confusing time because I was still struggling with the sexuality part and still questioning and asking myself why am I not interested in men who are interested in me? And I was questioning why can I not be a regular homosexual like all the other guys? I was also really scared to go to bed with someone, I couldn’t imagine giving myself intimately to another guy and I couldn’t understand why I was thinking like that until I was 20.”

Was there anyone you could talk to about your conflicted feelings?
Gia: “I thought I was falling in love with a female friend, who is my soul mate. I was able to talk about my feelings for her, with her. She was asking me questions like; “Why do you feel like that?” She felt it too but her opinion was that sometimes you don’t have to be romantic with someone, sometimes friendship is good enough. So I thought about that and also discussed my confusion about my sexuality with other friends.”

When did you start to make sense of your identity?
Gia: “Because I didn’t understand what I was feeling I talked more with people who knew about sexuality and gender identity. Then a friend suggested that I might be gay because I was attracted to men but also bi-romantic (when you’re romantically attracted to two different gender identities) and gender-fluid (being flexible with the sex with which people identify). Suddenly, I was relieved that I had a label for myself, that I could finally have some structure in my head about who I was. While I was telling people about how relieved I was about having these labels, another friend asked me; “Have you ever thought about being trans?” During that conversation I suddenly understood why I wasn’t attracted to gay men, because I felt like a straight woman.”

“It got to the point where I had to give myself a label. I know that many people dislike labelling themselves, but for me, knowing that I could do so to remove these question marks was really reassuring.”

How long did it take for you to ‘come out’ as trans?
Gia: “It took me 2 years to ‘come out’ as gay but when I discovered I was trans, it took me just two weeks to tell everyone because I didn’t want this to be a secret. And whether they were comfortable with it or not, I decided that was not my problem, it was theirs.”

What was your family’s reaction to changing your gender?
Gia: “They were so supportive! Their attitude has always been about whatever makes me happy, makes them happy. So I’m really lucky. Obviously you expect questions, but I was surprised by some of them. For example, my half-brother, who is 16 years old, asked, “Isn’t the transition really expensive?” Then after that he was like; “Fine, I guess I’ll have a sister then!” My older brother (25) was more curious to learn what transgender meant, because he had no idea.”

“I began to see that the gender with which I was expressing myself with was more fitting than the gender I was born with.”

When did you start transitioning?
Gia: “As soon as I discovered I was trans, a week later I joined the Ghent hospital’s waiting list to get myself on hormones. Four months later I made the decision to go private, since I didn’t want to wait for the hormones. My Mum was really supportive and got me private therapy as soon as possible since I was still in puberty and I wanted to prevent it. I was like a ticking time bomb. I was already seeing hairs on my chest, so I couldn’t afford to wait another year.”

What was the process with the hormones?
Gia: “Once you get the all-clear from the psychologist you can start hormones. But before that I had to freeze my sperm because I found out from a friend -not from the medical profession-, that hormone therapy makes you sterile. So although the assistance provided to transgender persons in Belgium is excellent, you really have to conduct your own research, because I learned more from my peers than from the medical community.I took estrogen in gel form which is like a hand sanitiser which you rub into your arm and then the hormones go straight into your bloodstream.”

Did the transition affect your mental health?
Gia: “It did when I started using testosterone blockers which helps with breast growth but they have to go through your digestive system which makes them very strong and dangerous and can mess with your head. That’s why you hear trans women say they feel mentally unstable. I have always been secure in myself, strong, stable and confident but one month on these hormones, coupled with a heartbreak, made me crash down. I was feeling depressed. Ever since then I have not felt myself. I’m about 50 percent of where I used to be.”

Has it been an issue being trans within your community?
Gia: “I feel lucky to have so many friends from the deeper queer scene as opposed to the superficial queer scene, which we have in Belgium. So, for me and my friends we don’t always feel safe in queer parties because there is still discrimination. For example from white gays to black gays and from gay people to trans women. In the superficial queer scene you can be gay, lesbian or trans. But in the queer scene I’m in now you can be trans feminine, trans non-binary, binary trans, people with different genders, different pronouns and different sexualities. So much freer and it makes me feel amazing to be around people who truly understand. But I do see how other people struggle and how lucky I am.”

Do you feel people don’t see you as normal?
Gia: “All the time. I meet men who look at me as if I’m an experiment. They have an interest in me, but they want to keep me a secret because they’re ashamed to be with a transgender woman. That’s why they’re never going to commit to someone like me.”

How do you think we can change attitudes towards transgenders?
Gia: “Change is starting to happen. I see thatwith images and reactions changing towards my community within mainstream media. It’s certainly changed since that film the Hangover 2 which portrayed trans woman as being freaks. I remember watching a scene where the men go to Bangkok and they look horrified to see a trans woman as her towel drops off and say; “What the fxxk was that?” I remember watching that movie and I thought they had that reaction because they were looking at a freak – a woman who had surgery to put a penis on her. It’s scenes like that that creates an impression as trans women being freaks. Now we have more understanding about trans woman who are being portrayed more positively in films, such as Laverne Cox and Indya Adrianna Moore. They are invading this world with their presence and steering the transgender community towards this radical change.”

Are you happy with your body now?
Gia: “I am very happy with my body, as you can see from the photos!”

How do you want people to approach you?
Gia: “The most respectful thing you can do is ask a person’s pronoun. It’s very well known in the queer world that this is a very respected question rather than assuming. I’m very happy to tell people that I am she/her, it means you address someone in the right way.”

What question do you hate to be asked?
Gia: “Tell me your worst traits. I mean why would I want to think about those things? Are they trying to make me feel insecure?”

Do you have a song that is your personal anthem?
Gia: “ ’Break free’ by Ariana Grande. She’s my inspiration. It’s such an empowering song.”

What advice would you give to others who want to make the transition like you?
Gia: “Don’t hide yourself for anyone. Look around, see what situation you are (for instance, if you’re in a safe space to come out as trans, do you have people you can trust in?) and only invest energy into people where you feel the energy is being reciprocated.”

Who are you becoming?
Gia: “I’d like to say a better version of myself, but it’s not true. I’m not a better version than I was last year. But I have evolved and I have learned. I guess I’m becoming more authentic.”

Find out more about Gia on her Instagram page @giarobleslevy. She will also be selling
T-shirts on behalf of clothing brand Essentiel Antwerp at Antwerp Pride from 10th to 15th August.